(New York, NY)— On Tuesday, February 25th at 10:30 am, NYC Public Advocate Letitia James will be joined by local leaders including Council Member Mark Levine and tenants in rallying against unfair treatment of rent subsidized tenants.
The management at Stonehenge Village, a mixed-income apartment building at on West 97th Street between Amsterdam and Columbus Avenues, is being criticized by tenants for preventing 60% of its tenants from using new gymnasium facilities that non-rent-stabilized residents are allowed to use. The practice sets a dangerous precedent that can have dangerous implications for millions of New Yorkers who reside in rent-stabilized apartment units.
WHO:                  Public Advocate Letitia James
NYS Senator Bill Perkins
Council Member Mark Levine
Stonehenge Village Tenants
WHAT:                Rally against unfair treatment of rent-stabilized tenants

RENT BILL RECEIPTS
Stellar is required by law (Real Property Law 235-e) to issue receipts for rent that you pay by money order or cash.  If you pay by check and still want to get a receipt, you must ask for it in writing each time.

NEW RENT REGULATIONS
The state housing agency overseeing rent regulation, DHCR, recently adopted new regulations.  (Landlords and some anti-tenant state legislators are objecting.)  Among other things, they include:
• Major Capital Improvement  No MCI increase if there is a pending hazardous violation in the building.  No MCI rent increase for electrical submetering.  Our lawyer has informed DHCR about this since we have a pending case opposing Stellar’s MCI for submetering.
• NEW tenants get information on the previous rent.   The owner must tell new tenants the previous rent stabilized rent and how the apartment was taken out of rent stabilization.   New tenants have just 60 days after getting their lease to ask for documentation supporting the work that was done to improve the apartment and that would justify that de-stabilization. (That can save them $$ later!)
• Tenants can file a reduction in services complaint without first sending a letter to the owner by certified mail.  (But sending things to Stellar that way is a good idea.)

SURVEYS  The state’s housing agency has created a Tenant Protection Unit (TPU), which considers building owners who are acting improperly.  Stellar tenants in several buildings have been reporting
• on-time payments not credited on the next bill,
• late fees where they're are not allowed,
• “non-payment” court action where tenant has paid the rent, and
• “non-primary residence” court action against tenants who in fact live in their apartments at least 183 days per year.

Whether that amounts to improper landlord behavior depends in part on whether it’s a widespread practice – and might well amount to harassment.   And the only way to know that is if you return the SURVEY you received last week.  Please fill it out and put it under the door of your floor captain or an Executive Committee members.  Don’t forget:
• Electrical submetering overcharge – were you one of the 142 tenants now getting credit?
• Late fees – they are illegal for rent stabilized tenants in this building.
• Whether Stellar threatened to or actually did take you to court for rent you had already paid, or for not living here when you do.

Your survey will remain anonymous.  We’ll add the information you provide to a summary without names, and only the summary will be shared with other tenant groups, and possibly the state. 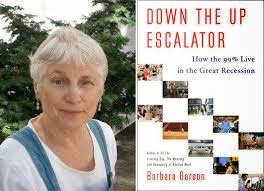 Many of us know Barbara for the wonderful roasts she and her husband Frank Leonardo bring to the Pot Luck every year.  But in addition to cooking and being a community gardener, Barbara is an author and playwright.  See her Wikipedia page!

In talking about her latest book, Down the Up Escalator: How the 99%  Live, Barbara spoke about the people who are doing everything they’re supposed to – “investing in themselves” with student loans, buying homes, raising a child, with both parents working full time – but unable to make ends meet.    Since U.S. wages have only gone up some 4% since the 1970’s, while productivity has gone up nearly 100%, more things are being produced than people can afford to buy.   Instead of paying people more so they can afford to buy what American companies are selling,   companies now lend the money through credit cards.  That means people have to pay money for the products they buy and often pay interest on the credit cards.

Barbara pointed out the big gap between people like most of us in this building, and the investors who become wealthy through buying and selling things that no longer represent anything concrete.  Instead of a bank holding a mortgage with a house as collateral, banks bundle tens of thousands of mortgages together and sell shares of that bundle.  (Since the bundles are “derived” from the original mortgages, the bundles and the shares of them that are sold are called “derivatives.”)   Since the original lender sells the mortgage for bundling with others, the lender doesn’t care whether specific mortgages were affordable to the people who took them or not. And so we have “bubbles” – people paying a lot to buy shares of packages of  . . .  things no longer connected to homes or corporations. In real estate, investors buy buildings on the assumption that they will be worth more and more – but if that turns out not to be the case, the owner may walk away (as Gluck did for the RivertonApartments), leaving the bank to foreclose – and run the building.

The book, like Barbara, is funny, smart,  and fascinating.

COMING SOON:
Wed., March 12 General Tenants Meeting: Tenant Patricia Jordan – retiring from decades of working with the city’s Department of Housing Preservation and Development (HPD), will speak.  HPD does both development an enforcement: It is the agency that is supposed to respond to many tenant complaints about lack of heat, hot water, and other legal requirements.   Many of you contributed clothing for the post-Hurricane Sandy shelters for the disabled and others that Pat set up and supervised.

OUR TREASURY:
If you haven’t sent in your apartment dues ($10/year) or contributed to our tenant association legal fund, please do.   Please give the contribution directly to your floor captain or to our treasurer, Joan Browne in Apt. 12F.


Got questions or suggestions?  Contact a member of the Executive Committee:

- Sue Susman, sue [ type the symbol for "at"] janak.org
- Na'ava Ades, na'ava [use an "at" sign] gmail.com
- Joan Browne, jbbrownefaison [follow with the "at" symbol] att.net
- Rich Jordan, richj214 [ use the at symbol] aol.com
- Steve Koulish, eskoolman [ use the "at" character] yahoo.com
- Greg Murray, gregmurray866 [follow with the at ] gmail.com