Late fees are illegal for rent stabilized tenants in this building because they were not provided for in our Mitchell-Lama leases.

Our lawyer stopped Stellar from imposing them in 2006, but it appears that building manager Tobias Sahl has been threatening to impose them.

By e-mail on March 25, 2009, Stellar agrees that they may not be imposed and will speak with Tobias. If you get a letter threatening a late fee, please report it to a member of the Executive Committee: Sue, Na'ava, Joan, Prue, or Steve.

In 2006, the CPG Tenants' Association's lawyer wrote to Stellar Management:

"On October 7, 2005, I wrote to you and informed you that late fees
were being charged to tenants despite the fact that the Mitchell Lama
leases had no provision for late fees and therefore that condition
cannot be imposed under the Rent Stabilization Law. Susan Susman,
president of the Tenants' Association, advised Hezi Mizrahi, Francine
Schiff and Ofer Shaul several months ago that the late fees were
illegal. Despite my letter and Ms. Susman's complaint, tenants at
Central Park Gardens are still being billed for late fees. If we do
not receive a representation from you within 10 days that this
practice will be discontinued we intend to file a formal complaint
with the Attorney General of the State of New York based on deceptive
practices."

And remember that there is no legal "grace period" for paying the rent. It is due on the 1st of the month.
Posted by Sue Susman at 10:08 AM No comments: 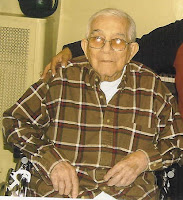 The Tenants Association mourns the loss of our long-time friend and neighbor Joseph Rios. The husband of Gloria Rios in 7S, Joe was a proud United States veteran. Illness had confined him to a a nursing home for the past few years, where Gloria visited daily. Joe died in early March 2009. We extend condolences to Gloria.
Posted by Sue Susman at 5:12 PM No comments:

Senator Stewart-Cousins has re-introduced the bill to extend rent regulation protections to all Mitchell-Lama and Section-8 buildings that exit their program, including retroactively, and eliminate the “unique or peculiar” loophole.

The bill is numbered S3326. Now we're hoping that it will be introduced in the State Assembly by someone on the Housing Committee.

So we can thank Sen. Bill Perkins for coming through on his promise to support the bill. (You can e-mail him at perkins@senate.state.ny.us .)

From 11 AM to 4 PM on Thursday, April 23rd, the NYS Assembly's Housing Committee is holding a hearing in NYC on Mitchell-Lamas. We need people from this building to attend (and speak if you are so moved) in support of that bill (called the "Andrea Stewart-Cousins bill") at the hearing.

As Amy Chan of Tenants & Neighbors (and chairperson of the P.I.E. Campaign), wrote, "It is extremely important that we attend the hearing in large numbers and call on the Assembly to support this legislation."

And come learn more about the political situation from Tom Waters, housing analyst at the Community Service Society (and author of several studies on affordable housing) at our


Bring a chair and a neighbor.
Posted by Sue Susman at 9:45 PM No comments:

In the Highbridge House case, Gluck and other owners of 15 former pre-1974 Mitchell-Lamas are suing the state's Division of Housing & Community Renewal. The landlords are asking the court to invalidate DHCR's November 2007 regulations that say that just leaving Mitchell-Lama is not by itself a "unique or peculiar circumstance" justifying a rent increase. Central Park Gardens is one of the buildings involved, so our tenants' association - along with that of Westview (765 Amsterdam) and Prospect Towers in Brooklyn - have become parties in the case.


Justice Alice Schlesinger of State Supreme Court told Gluck and his fellow landlords in that case that they could not withdraw from the case as they sought and had a week to move for "summary judgment" in the case. (Summary judgment is a determination based solely on whether the law is correct or not - because no one is disputing any facts.)

The landlords submitted their motion for summary judgment by the judge's deadline, and three of the tenant associations - Central Park Gardens, Prospect Towers, and Westview (Manhattan) have cross-moved for summary judgment. Our lawyer, David Ratner of Hartman, Ule, Rose & Ratner, did an outstanding job.

Click here for a copy of the Memorandum of Law supporting the tenants' cross-motion for summary judgment.

Click here for a copy of the tenants' Notice of Motion, Affidavit and Exhibits (all the complaints and answers) in the Highbridge House case.
Posted by Sue Susman at 1:46 PM No comments:

Several groups are working for Real Rent Reform - to change the rent stabilization law. One important change would repeal vacancy decontrol. (Under Vacancy Decontrol, a landlord may take an apartment out of rent stabilization permanently by increasing the rent based on "improvements" to the apartment - improvements he does not have to document in any way unless the new tenant challenges him legally.)

Our building was represented at the March 11, 2009 Press Conference and Rally to Repeal Vacancy Decontrol.


Saying the time is ripe in Albany, City Council leaders launched an attack Wednesday on state-enacted rent regulations that have been a bane for tenants and a boon for landlords.

Led by Council Speaker Christine Quinn, a group of Council members joined more than 100 tenants and housing advocates on the steps of City Hall to announce the introduction of legislation calling on the state Legislature to repeal vacancy decontrol and to kill a state law that allows Albany to set rent regulations for the city.

Click on the link above for the full article.
Posted by Sue Susman at 10:51 AM No comments:

At a meeting with tenant leaders from several of the current and former Mitchell-Lamas in his district, State Senator Bill Perkins promised to help get the proposed Stewart-Cousins bill passed.

That bill - soon to be introduced by State Senator Andrea Stewart-Cousins - would put all buildings leaving Mitchell-Lama (and Section 8 projects) into rent stabilization
Sen. Perkins agreed to co-sponsor the bill, and said he would speak with Senate Majority Leader Malcolm Smith and with Senate Housing Committee Chairman Pedro Espada to promote the bill. He was optimistic that the bill would be passed this year with a lot of hard work from tenants.

As we handed him the letters from our building and the others, he remarked, "That's quite a pile!"
Posted by Sue Susman at 9:28 AM No comments: