This Friday, April 27 - a Tenants PAC fundraiser (see below).

Tuesday, May 1 - The Rent Guidelines Board holds a preliminary vote, and tenants - the 99% - join Occupy Wall Street in a "Tenants General Assembly" outside the hearing space at 5 PM.  Cooper Union's Great Hall, 7 E. 7th St. (3rd Ave.) - and consider going in to testify! 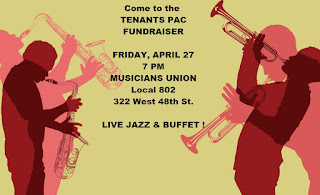 Meet Assembly Member George Latimer at Friday's event.  He will be running for  an open State Senate seat against a Republican New York City  landlord.

A great jazz trio performing for you, courtesy of Local 802:


You can send your contribution to

Or you can make contributions (including recurring ones) at www.tenantspac.org. Donations are not tax deductible.

RSVPs requested but not necessary!

That leaves New York's rent laws intact - and lets us focus on fighting to strengthen rent regulation and with luck to get more market-rate tenants back into it.

See the NY Times and Bloomberg.com articles about the case.
Posted by Sue Susman at 10:02 AM

Jewish Home Lifecare wants to move from 106th Street to 97th Street between Columbus and Amsterdam Avenues.   Of late:

Summary of April 18 2012 Meeting with Stellar

RENT BILLS: Smajlje will try to get rent bills to tenants a day or two earlier, possibly by having them delivered by hand in the building (as used to be done).  He asserted that the delay was integrating delayed Con Ed information into the rent bills.

Smajlje stated that NO tenant would face legal consequences for paying the April 2012 bill late as long as it was paid within the month of April.  There are, of course, no “late fees” for rent stabilized tenants in this building, although market-rate tenants may be subject to them.

II.            LEASE CORRECTION:  Although all rent stabilized tenants had a permanent MCI increase added to their bills in April 2011, a few tenants in this building found that Stellar added that amount AGAIN on their lease renewals.  Smajlje said those lease renewals would be reviewed and corrected.

BUILDING ISSUES
·      Repair procedure (reaffirmed) : Tenants who need a repair should write it in the book at the guard's desk in the lobby.  If the repair is not made within a week, tenants should telephone Stellar's local office.  These repairs include closet rollers to repair the doors, and decayed silicon around the posts holding the balcony railings.

·       Compactor Rooms: New signs have been posted. Tenants are urged to follow them.

·       Elevators:
o   Stellar has notified the repair company of the complaints reported.

o   Smajlje said they would work on refinishing the elevators whose current surface looks dirty all the time.

o   Stellar will place a “lobby” notice opposite the elevators on the ground floor.

·      Intercom: The list will be reformatted so that every tenant named on the lease is listed in alphabetical order – and not as it now is, with the name of their apartment-mate earlier in the alphabet.
·      Hallway carpets: The building has just bought new vacuum cleaners for the maintenance staff to use.  That may keep the hallway carpets cleaner.

·      Hallway exit signs: Stellar will not change them for higher or smaller signs. Watch your head.

o   There is now a recycle bin and a garbage bin.  Please only put recyclable materials in the recycle bin.
o   The machines will be replaced when the contract with Coinmach expires in August 2015.  In the meantime, Coinmach will service the machines monthly in addition to coming to make repairs.  Please call Coinmach to report break-downs and to get refunds, or write the problem in the book at the guard’s desk.

Plantings:  Stellar will shortly plant flowers around each tree in front of the building.

·      Tenants to Meet Smajlje: Smajlje said he would provide coffee and donuts  (not from the building fund) for a get-together with tenants in order to hear what individual tenants want to tell him about the building.  Date to be set later.

Our next General Tenants Meeting will be WEDNESDAY, MAY 16 at 8 PM in the Community Room.  Bring a chair and a neighbor!

Injunction could halt plans for Jewish Home Lifecare relocation
In at least a temporary victory for Park West Village tenants, a judge agreed to an injunction preventing any modification of the parking lot that the nursing home plans to relocate to.
By Casey TolanSpectator Senior Staff WriterPublished April 9, 2012