Summary of the May 16 General Tenants Meeting

Cleaning Staff to rotate - To ensure that both sides of the building are equally cleaned, Stellar is now rotating the assignments of the building staff.   So some of the faces may be different on your side.

Community Room - Stellar has supplied the promised chairs and two tables.  Since they're for the use of any tenants renting the Community Room, the chairs and tables stay there. (They seem to have a tendency to wander off.)  They're kept in the locked coat closet, which the guard will open the room for those with permission to use the Community Room.   Please remember how well noise travels in the building, and remind your guests that those directly above the room may not appreciate all the rejoicing below.

Cigarettes - Did you know that cigarette smoke from stairwells and balconies wafts (not so nicely) into neighboring apartments?  Ditto for cigarette butts that are left to blow off the balcony. So please be considerate.  Better yet, stop smoking!  We need all our tenants healthy.

Compactor Rooms - Stellar will put carbon filters in some of the hallways and some particularly smelly compactor rooms.  Keep things clean in there: rinse items before recycling, and put all garbage all the way down the chute.  If you have big items to dispose of, do it late Tuesday since recycling occurs on Wednesdays.


Elevators - The insides are being refinished or, as Stellar puts it, cleaned.  That is not a basis for a major capital improvement (MCI), but it is a basis for inconvenience - particularly when, as happened on May 22, Elevator 4 broke down while Elevator 3 was set aside for cleaning. Fortunately, Umar (the doorman) ensured that we had service.  The guard is the person to call if the building staff is not on duty and there is this type of difficulty or building emergency.

Intercom - Stellar still hasn't figured out a way to fit the name of every tenant on the lease onto the intercom board, mainly because they don't want to buy a new frame. Presumably they're working on it.

Laundry rooms - It takes 3 days for Coinmach to make repairs, and obviously longer if there's a weekend.   If you have your cell phone, please call Coinmach to report the problem and to get a refund.  Yes, they actually do mail it to you in several weeks.

Repairs - Stellar promises the broken tiles will be replaced, bit by bit.  And the elevators are being cleaned.  Because the coating that was originally installed cannot be cleaned, it appears that the insides will be re-coated with a substance that can be.   And of course if you need a repair in your apartment, write it on the list at the guard's desk.

Side Doors - Please make sure they're completely closed after you for all of our security.

Starting in August, garage tenants who live in this building will no longer get separate garage bills from Kensington Enterprises (a subsidiary of ICON).  Instead, our garage bills will appear on our rent bills.

Our lawyer advises us that stabilized tenants are not required to sign the garage leases - but that will not stop the rents from increasing by the same percentage as our apartment rents increase.  Should you decide not to sign, send Stellar a letter that you can download here.

RENT BILLS
If you see a minus sign (it looks like this:   -  ) to the left of a number on your bill, it means that's a credit, and not something you owe.  Read your bill carefully!  If it includes things you don't understand, call Stellar: 212-406-0030 and ask about it until the question is answered to your satisfaction.
Many bills have been wrong for the past two months:

POT LUCK - Saturday, June 2nd from 6 - 9 pm in the Community Room and the Backyard!

What will you bring?  If you bring food for 8-10 people, it's free for your household.  You can also work and come for free (help set up by 5 PM, help re-fill the serving trays, clean up).  Otherwise, it's $10 per person, $15 per household, and $10 for each outside guest.  Contact Debbie Gonzalez to say how you'll contribute.

This does NOT apply to market rate tenants, nor does it apply to SCRIE or DRIE tenants.

We have to pay off the "MCI retro" amount until the full temporary retroactive bill is paid off.  To do that, tenants can be charged 6% of their current rent bill every 12 months.

BACKGROUND:
Rent stabilized tenants received a permanent Major Capital Improvement (MCI) increase in April 2011 to pay for the complete elevator renovation.  That increase became part of our base rent, and will not ever be taken off our bill.

But the state housing agency (HCR - formerly DHCR)  also required that we each pay Stellar a few hundred dollars more, equal to 10 month's worth of the MCI for the 10 months before the MCI was granted. That retroactive amount is a temporary charge: once you've paid it, it comes off your rent bill.  Rent stabilized tenants - except SCRIE and DRIE tenants - must pay this.

A few tenants paid off the retroactive amount in one lump sum.  Everyone else is paying it off in bits and pieces.  It should take no more than 2 years from April 2011 to finish up.

How much can the tenant pay off each month?

But the tenant just got a permanent MCI increase of $30.68.  That just leaves $5.32 that a tenant can pay every month toward the temporary retroactive amount of $306.80.

So now, the tenant will be charged $37.84 for the "MCI retro" (temporary retroactive amount) until it is fully paid off.

If the tenant has gotten a lease renewal in the meantime, the tenant's base rent will be higher, and Stellar will take 6% of that each month to pay off the rest of the MCI retro.

Look at what you're paying for the MCI retro now on your rent bill.   For most people it should be between 2 and 9 months to pay it off.

Our tenant association co-sponsoring a Tenant Town Hall on Thursday, June 7th at Hartley House, 413 W. 46th St. (between 9th & 10th Aves.) with many other groups and our elected officials to get more tenant protection - for all tenants, a limit to MCI's, and a reformed Rent Guidelines Board.
6:30 PM.

Our Assembly Member, Daniel O'Donnell, is a co-sponsor and many other legislators are invited.

The Rent Guidelines Board itself is holding meetings for public testimony on
The final RGB vote will be Thursday, June 21 beginning at 5:30 PM.  They're threatening up to a 6.75% increase for a two-year lease renewal.   R3 will be there - so join us!   We'll post a list on the mailroom board for those who want to go down together.

Are you following R3 on yet?  http://www.facebook.com/realrentreform.  Become a facebook "friend"!

Jewish Home Lifecare construction - Park West Village tenants sued Chetrit & Gluck, complaining that the parking lots are an ancillary service for the tenants, and provide much more convenience than underground valet parking half a block away.  The court said the case could continue if the tenants raised a $75,000 bond - which they did!  This may hold up the construction on the parking lot next to P.S. 75.

Political History of our Neighborhood - Congressman Jerrold Nadler (who helped found this tenant association when he was in the NYS Assembly) will talk on local political history on Monday, June 11th at 8 PM at the Youth Hostel on Amsterdam between 103rd and 104th Streets.

COME AT 8 to the COMMUNITY ROOM

This is your chance to figure out why and how your rent bills are messed up, and what you have to do about the MCI retro on your bill!  Please come and share your questions: you're not alone!

Learn what Stellar's building manager, Lu Pedraza, promises or has done or won't do!

We're part of the R3 campaign - so find out what we're up to!

Jewish Home is planning to build on 97th St.  Wanna know the latest?

General Tenants Meeting - Wed., May 16 at 8 PM in the Community Room

Join us to talk about
BUILDING ISSUES, including smoke (marijuana and tobacco) rising through the stairwells,
and lit cigarette butts wafting dangerously from one balcony to another; the intercom list, elevators, and more.  (Got a topic to add? Tell the executive committee before our meeting with building manager Lu Pedraza on Wednesday morning.)

OUR JUNE 2nd POT LUCK in the COMMUNITY ROOM  (6-9 PM)  Have you told your floor captain what you're bringing or how you'll help out?

JEWISH HOME LIFECARE's proposed construction on 97th Street between Columbus and Amsterdam - and the lawsuit that may hold it up. 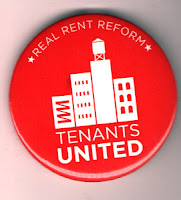 REAL RENT REFORM's upcoming  Town Hall meeting on June 7th  - that our tenant association is co-sponsoring.  It will be in midtown (Hell's Kitchen) at Hartley House, 413 West 46th Street (btw. 9th & 10th Avenues), and focus on J-51 - a tax benefit for landlords whose protections for tenants have fallen by the wayside. Let's pressure the state legislature to pass some bills that benefit tenants.
BRING A CHAIR AND A NEIGHBOR.
Posted by Sue Susman at 10:47 AM