Summary of our June 29, 2022 Tenant Meeting with Cordell Cleare

The night was balmy, we had gentle lighting, and not too many bugs. 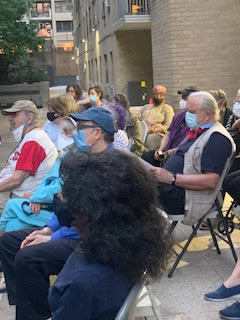 We began with a moment of silence for tenants we have lost since the last meeting:

Thanks to Jodi Brockington for the photos.

Rent Guidelines Board - this applies to tenants who are rent stabilized. If you're not rent stabilized but possibly could be, email DHCR for your rent history and contact the tenant association.

These are the highest increases since the Bloomberg administration, and reflect the votes of RGB members appointed by Mayor Adams - including one who doesn't think rent regulation is a good idea.  The mayor immediately tried to walk back the impact (and the bad press) by complaining about the new guidelines, but the board chairman serves at the mayor's pleasure, and his vote obviously reflected the mayor's views.

If you are not a forgetful person, feel free to take a 1-year lease renewal.

The City Council recently voted (as expected) to renew rent regulation under NYC laws until April 2024.  We have rent stabilization under the state's Emergency Tenant Protection Act - which provides that apartments in all buildings of 6 units or more built before 1974 are rent stabilized.  Some, of course, have gotten taken out over the years - before the 2019 law that makes it VERY hard for landlords to remove apartments from rent stabilization.

Stellar continues to refuse to rent out some 10 vacant rent stabilized apartments. Our tenant association - as part of Stellar Tenants for Affordable Housing - is part of a large coalition supporting a state and a city bill on this issue. Read about it all at www.endwarehousing.org.   Sometimes Stellar wants to merge two units and create a new one at a higher rent - such as Apt. 14KL and Apt. 2N-3N. But often landlords hold onto vacant apartments because they claim it's not worth the $85 rent increase they can get by renovating it.  Of course they could repaint, make basic repairs, and rent it out at the legal regulated rent.  The landlord group CHIP offered to have its members put rent stabilized units back on the market IF the state would weaken the 2019 Housing Stability and Tenant Protection Act.

We were lucky to have Sen. Cleare since Gov. Hochul called an emergency legislative session in Albany for June 30th to discuss how NYS could respond to the U.S. Supreme Court striking down NY's 100-year-old concealed-weapon law. But she came!  She will be our State Senator until Dec. 31, 2022, at which point our district will change.  We'll have a primary election on August 23, 2022 for a new state senator (currently Brad Hoylman is the state senator representing the district with which we'll be merged) and our congressional representative (now Jerry Nadler). 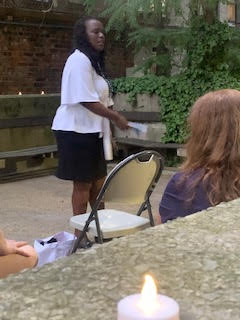 She suggested to Gov. Hochul that concealed weapons be barred from all places unless the owner explicitly invites them.  That appears to be the position the Gov. is now taking.

Sen. Cleare engaged with tenants, answering a lot of questions, and we're sorry to be losing her as our representative.

Condolences to our super, Sako Kolenovic, who is away since his mother just died.

Composting: The collection food waste has returned to our building as of June 30th. This is an important tool in reducing vermin infestation: we'll limit which waste containers have any food in them and limit food going down the chute.

Senior safety: If you live alone, please make sure the super or another tenant has your key in case of emergency.  It's a good idea to also have some kind of medical alert system - as a watch or pendant - you wear all the time.  A slip in the shower can have dire consequences.

Smoke: If you smoke (cigarettes, cigars, marijuana....), use an air purifier to avoid the smoke going into your neighbor's apartment.  Please do NOT smoke in the stairs.  That goes into all the apartments adjoining the staircase on every floor.  If your smoke gets into other apartments, Stellar could go after you as a "nuisance" subject to eviction.

Doors: Your apartment door and the stairwell doors should close by themselves. If they don't, they're a fire hazard.  If yours don't close, write up an order at the guard's desk in the lobby.  If your kids slam the doors, ask the handyman (Santiago Modesto, often called "Ito") to adjust the spring so they'll close more slowly. 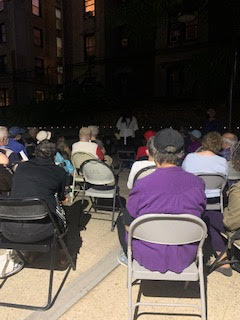 The outdoor lights are not working, so as the evening progressed the meeting was mainly sound - not sight.  We ended up turning around to face the building and the building lights - and have asked the manager (Bashkim Beria) to repair the pole lights.

RiteAid: Tenants have noticed shoplifting there, and some store personnel have said it may close down because of the shoplifting.  So write to the CEO, Ms. Heyward Donigan, heyward.donigan@riteaid.com to ask that they have a full-time security guard (they don't now) and use technology to ensure items are paid for.  We need that store!