Summary of the March 27, 2019 Tenants Meeting with CM Mark Levine

COUNCIL MEMBER MARK LEVINE SPOKE AND ANSWERED QUESTIONS ON MANY TOPICS
(Download a version of this summary here.)

RIGHT TO COUNSEL - This is the right for tenants who can't afford lawyers to have them provided for free in Housing Court.  NYC is the first place in the U.S. that this exists, and because of it, evictions are down 37%.  (In part, landlords are bringing fewer cases knowing that the tenants will be represented by lawyers from nonprofit organizations.)  The program is being rolled out slowly over 5 years and this is only year 1 - so this drop is significant!  With the lobbying and backing of CASA and other tenant organizations, Mark led  the fight for this bill to success in the NYC Council.

The drop in evictions has also led to a drop in the number of families showing up at city homeless shelters.  The shelter system houses over 60,000 people a night, primarily families with children - more than at any time since the Great Depression. Some 25,000 children per night stay in these shelters.  Most of the homeless are not mentally ill or addicted.  The bulk of them simply cannot pay their rent, even though they are employed.

SAVING LOCAL STORES -  There is almost no protection for these stores and city-wide about 20% of storefronts are vacant.  The City Council and Manhattan Borough President Gale Brewer are proposing a few remedies to stop the "chainification" of NYC:
Citing the example of Bleecker Street, Mark noted that where a building or block owner lowers the rent, innovative entrepreneurs will jump in.

MONEY FOR PUBLIC TRANSIT - Albany (as opposed to NYC) was considering a "pied-à-terre" tax for luxury apartments that the owner doesn't actually live in, but keeps for those brief trips to NYC for the opera, etc.  Some are kept for investment value (in some cases for money laundering).  If you look up on 57th Street at the huge towers at night, you will see most of the apartments are dark.  Those owners do pay (low-ish) property taxes, but don't pay any income tax to the City or State.  If Albany passes this tax, the money will go to support the MTA, which needs billions of dollars to run smoothly after years of non-investment.

CONGESTION PRICING - The subway system is crumbling, and for the first time in NYC history, the population is growing but fewer people are riding the subways and buses.  With congestion pricing (a state legislative decision), every car coming into the area from 61st Street to the Battery of lower Manhattan would be charged a toll (like $10).  Using London as a positive example, this would reduce congestion, reduce air pollution substantially, and reduce carbon emission.  It would also allow the buses to travel more efficiently.  That, with GPS-triggering light changes, would make the buses move more quickly than pedestrians and increase bus ridership.  The money from the tolls would go to the MTA to fix the subways.

Those just passing through Manhattan on the FDR without stopping between 61st and the bridges and tunnel would not be charged money.  Tolls paid on the bridges or tunnels would be deducted from the midtown toll, and there would be exemptions for some drivers, including the disabled, the poor, and those coming for medical visits. This remains yet to be determined by Albany.

CiTI BIKES - A parking area for CitiBikes could accommodate one or possibly two parked cars, so the loss of parking spaces is made up for by the increase in non-polluting vehicles.  Mark said that all traffic laws, including for bikes, must be enforced.  He noted the hierarchy:  Cars are dangerous to bikes and people;  bikes can endanger people.

LEAD POISONING - The City has failed to protect children from lead poisoning, with up to 4,000 diagnosed with lead poisoning in 2018.  The lead comes from:
10 bills have passed the Council concerning lead paint.  The Council is now working on additional bills for the other sources of lead pollution.

WAGE THEFT - This happens all the time in car washes and some other small businesses. He will check about the status of Indus Valley on 100th and Broadway. Its owners were ordered to pay their workers enormous sums in back pay -  and then apparently changed its ownership and name to Manhattan Valley.  It's not clear if the payments were made.

BARGE ADS ON THE HUDSON - Mark had to leave early for an interview with NY1 about the barges towing building-sized ads on the Hudson.  From Mark's newsletter: These barges are more than just an obnoxious eyesore - they are a danger to drivers on the City's arterial highways - and they are operating illegally in violation of several NYC laws.  Earlier this week, I introduced new legislation to raise the fines on these barges with my colleague, Council Member Justin Brannan.  After we called attention to the issue, I was glad to see the Administration announced they would be taking the barge's operators to court to enforce the existing laws making these boats illegal.
IN OUR BUILDING

Composting - Soon we will have a brown compost bin in each compactor room on the ground floor. Once they're installed, you can take all your food and wet paper trash to the brown NYC bins. That means less wet trash going down the chutes, and more fuel for City buildings when they convert the biomass into electricity.  You can keep your food trash in a plastic container (some keep it in the fridge or freezer) that you bring down and empty. Or put it in a biodegradable plastic bag now that single-use plastic grocery bags have been banned in a new state law.

Terrace repair:  The contractor is erecting scaffolding on the front of the building .(The H line at the back of the building hasn't been completed yet.)  Once the back is done, Stellar will have that scaffolding removed.  Tenants in the G and F lines must clear everything off their balconies and should invest in earplugs.   To prepare:
If the noise is driving you crazy, hang out in the Community Room on the ground floor.  (Note that it's the staff's rest and lunch room from 12 to 1.)

LEARN YOUR RIGHTS AND MAKE YOUR VOICE HEARD 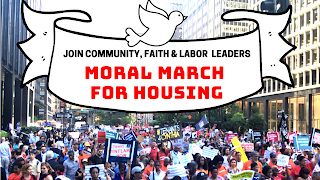 APRIL 11, 2019 at 5:30 PM  Housing Justice for All  (of which our tenant association is a member) is having a rally at the Abyssinian Baptist Church at 132 W. 138th Street.  Support the platform and show our electeds we mean business.

APRIL 18, 2019 at 6:30 PM State Senator Brian Benjamin is having a "Listening Tour" session at Goddard Riverside on Columbus and 88th Street. Please go and ask him your questions.  State Assembly Member Daniel O'Donnell and State Senator Robert Jackson are also planning a town hall - time and place to be announced.  Attend these sessions and raise tenant protection and election reform concerns:
APRIL 18, 2019 at 6:30 PM The Bloomingdale History Club is hosting a discussion at Hosteling International on Amsterdam Ave. at 103rd Street about protecting our Mom-and-Pop stores.

MAY 14, 2019: Save the date for a tenant lobby trip to Albany.  If we don't show up, they don't take us seriously.  The bus trip is free, and you'll get a mini lesson on how to lobby effectively.