With some 20 people on the call, it was more of a conversation than a formal meeting. 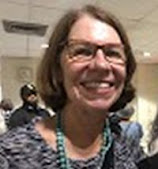 Barbara Geller is the new representative for Bloomingdale Aging in Place (BAiP), an all-volunteer group on the Upper West Side for anyone 18 and over.  BAiP has seminars and workshops - and also walking tours, trips to museums and restaurants (for after the pandemic), physical fitness classes of all types (now all on zoom) and many, many more activities.  Membership is free, and you should join!  If you have questions, email Barbara (her first and last names followed by "NYC" at aol dot com).  Speaking of free physical fitness, ShapeUpNYC is holding various free activities in the parks.
We remembered Abe Pitsirilos, who died suddenly on March 27, 2021.

Then we heard from Assembly Member Daniel O'Donnell.  Danny has recently sponsored two bills that are coming to fruition:  one to restore voting rights to people released from prison, and one to ban the use of fracking products to de-ice our roads.
Danny spoke about the NYS budget, the largest ever.  He thanked U.S. Senator Chuck Schumer for ensuring that NY got (will get) a lot of federal money.
The budget includes, among other things
There are also changes to Medicaid, to reimbursement for community health facilities, to a cap on co-pays for insulin (to $100/month), and more.
Danny talked about trying to stop no-knock warrants (the use of which led to Breonna Taylor's death), and to ensure that when prosecutors present serious cases to the grand jury, they tell the grand jury all the elements of the law.  (For example, some laws don't require that the accused intended to cause harm - just that the harm occurred.)
After answering lots of questions, Danny left - and we talked about building issues.
1. Pot smoking is not illegal, but smoking anything in the building's public areas and stairwells is not allowed.  Worse, it spreads the smoke all over.   If you're going to smoke, please do it in your apartment with an air filter to keep it from drifting through the vents to other apartments, or on your balcony.  Of course don't throw butts off the balcony since the wind can carry them to other balconies and start fires.  (We've asked for camera repairs in the stairwells.)
2. Rats are fleeing the construction site on West 96th Street, coming toward our building. While none have been spotted IN our building, we need careful extermination.
3. The backyard has been cleared of construction debris.  So we need to ask that it be opened to tenants.
If you have suggestions for meeting topics or for the executive committee of the tenant association to raise with the management, contact Sue  Susman (first and last name separated by a period, followed by at gmail  dot com).
Posted by Sue Susman at 9:57 PM