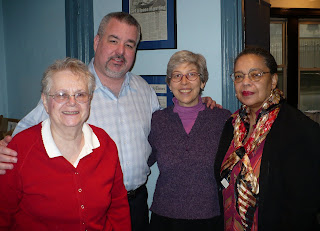 On Friday, May 9, 2008, three tenants from Central Park Gardens met with our State Assembly Member, Daniel O'Donnell to talk about pending and future bills for the state legislature. (See photo of Eve Posen, Danny O'Donnell, Sue Susman and Joan Browne.)

While it is unlikely that pro-tenant bills will ever reach the State Senate floor as long as Senator Joseph Bruno is Majority Leader, the situation may change if two more Democrats are elected to the State Senate. (Not all Democrats are pro-tenant, but the leadership of the Senate would change, and the would-be majority leader, Senator Malcolm Smith, is pro-tenant.)